A Glance at The Magnificent Seven Slot Online

Many years ago there was a movie set in Western America called The Magnificent Seven. The movie featured many famous names at the time, including Steve McQueen. The Magnificent Seven slot by IGT is based on the movie and has a Western theme and lots of theme based symbols. All of the twenty paylines are optional and a coin value of 0.01 up to 25 can be applied. This makes the game a good one for all budgets, as it can be played for very little per spin, or quite a bit for those high rollers.

The graphics in The Magnificent Seven are pretty unique. They are done in drawing style, but are blocky and have a lot of contrast. The Magnificent Seven is a good looking slot in its way, it does not have 3D graphics but its style suits the theme. The reels are made to look as if they are a poster stuck to a wooden board, much like a wanted poster. On either side of the reels are western gunmen, presumably outlaws and cowboys.  All the player info is laid out in easy to understand buttons at the bottom of the screen. The simple layout and attractive graphics of The Magnificent Seven will appeal to most players, making this a good slot for beginners to cut their teeth on.

As mentioned, The Magnificent Seven was a movie set in the epic Western area of the USA during its infancy years. All the symbols in the game reflect this, even the base ones that are actually from a set of poker cards. Since poker cards were very popular in the Old West, they have been designed to fit in well with the theme with a Western looking font and a fanned deck of cards behind the actual letter.  The rest of the symbols include a Stetson or cowboy hat, a horse, a lasso, crossed pistols and a knife. The highest paying base symbol in the game is the Lucky seven, which will pay out 500 coins for five of them. 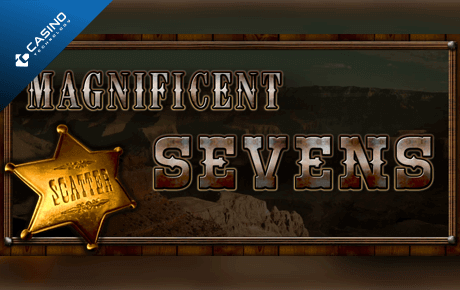 The Magnificent Seven slot has a number of features including a wild and a free spins round. The wild symbol is a wanted poster with the word Wild written on it. This will take the place of all other symbols in the game except for the bonus scatters playing real money slots for Android.

The games logo is the scatter symbol in The Magnificent Seven. This can be found on any of the reels and three or more of them will launch the free spins round. During this round you will find special extra wilds that will turn sticky, or remain in place on the reels while they spin. You can get up to six free spins with these sticky wilds. This feature gets triggered quite often.

Should you find bandit scatter symbols on the first and fifth reels at the same time, you will be taken to a second screen bonus round. Here you have to shoot bandits by clicking on them. These bandits will award you with cash prizes as well as multipliers. The game is over when the cash out occurs.