Players will be delighted to know that Crocodopolis video slot is fully customizable. Players are able to adjust the wagered amount as well as the active paylines available, thus allowing for complete control over wagered amounts.

Players can expect to uncover ancient symbols from the sands of time, these symbols include but are not limited to an ankh, a hieroglyphically illustrated papyrus scroll, a jewell encrusted scarab beetle and the various faces of Egyptian gods.

The crocodile god Sobek, gleaming in the sun and extending his finger boldly represents the wild symbol in Crocodopolis video slot. Players will be delighted to know that the crocodile wild has a unique feature within the slot game, known as the slide a wild feature.

A wild on reel one will double the prize, if the crocodile wild symbol is part of a winning combination.

A wild on reel two will triple the prize, if the crocodile wild symbol is part of a winning combination.

A wild on reel three will see the crocodile wild symbol expanding over the entire reel to cover it completely. The reels will now be reassessed for winning combinations automatically.

A wild on reel four will triple the prize, if the crocodile wild symbol is part of a winning combination.

A wild appearing on reel five will see all symbols on reel five turned into wild symbols, if any winning combination is made the prize will be tripled.

The pyramid tinged in golden light, represents the scatter symbol in Crocodopolis video slot. Players should keep a keen eye out for this symbol, as it will trigger the free spins feature of the slot.

If players manage to land three or more golden pyramid scatter symbols anywhere on the reels the free spins feature of the slot will be triggered. Players will now receive twelve free spins, with all wins subject to a two times multiplier during the feature. Mobile pokies NZ players will be delighted to know that the free spins feature can be retriggered by landing more pyramid scatter symbols on the reels. 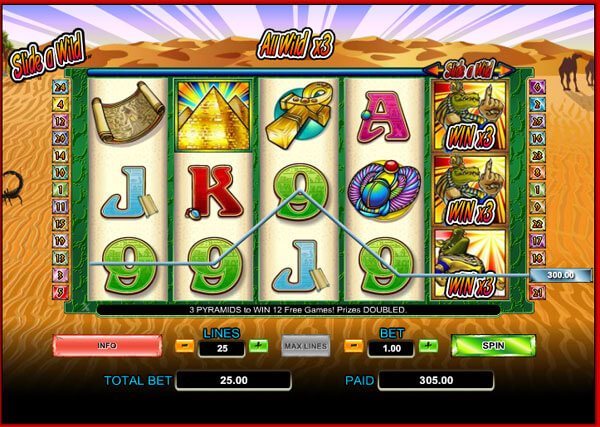 Crocodopolis gives players the choice to try their luck after each win by clicking on the gamble button just underneath the reels. If players are feeling lucky and opt for this feature they will be transported to a guessing game whereby players must now choose the next correct card drawn in order to double the win, or the next correct suit, which will see any win quadrupled.