The casino opened in 1994 under the name of The Southern Belle Casino. This didn’t last long as the casino closed its doors only a few months after opening them, and stayed closed until Harrah’s Entertainment, which owned a casino about half a block away, bought and reopened the property in 1996. Harrah’s briefly operated both properties, but eventually closed to old one and concentrated purely on the Southern Belle. In 2004 Harrah’s bought Caesars Entertainment, which would go on to become one of the biggest casino and resort companies in North America. This would mean that Harrah’s, or Caesars would have control of five of Tunica’s nine casino’s. Harrah’s then decided that in the spirit of fair play, and anti competitive domination that they would sell the Southern Belle along with one other River Belle Casino Canada to Colony Capital, who renamed the resort in 2005 to Resorts Tunica.

Today Resorts Casino Tunica is a nice medium sized hotel with over 200 rooms. All of the rooms feature a seating area and your choice of either two queen size or one king size beds. The rooms come with mod cons such as hair dryers, irons and ironing boards, and coffee makers. 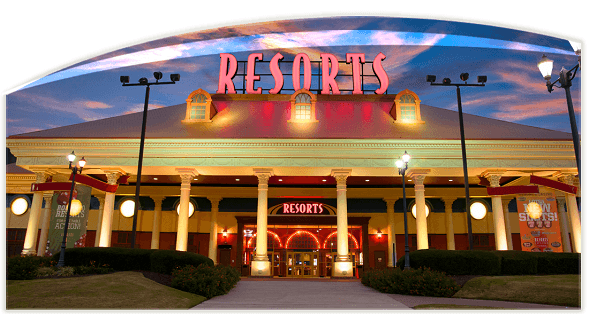 Dining at Resorts Casino Tunica can be done in one of three different restaurants. A fine dining steak house offers an a la carte experience, with a good selection of wines. The buffet restaurant is guaranteed to satisfy even the biggest of appetites and features a number of cuisines including Chinese, Southern, Mexican and Italian. Big Burgers is open 24 hours and caters not only to players but anyone wanting to grab a bite at all hours of the day. They specialise in a five pound enormous burger that has a ridiculous amount of patties and would probably feed a small nation for a month. Entertainment is provided by stage bars that are scattered throughout the casino floor and feature not only live music but other acts such as comedians and even wrestling. These bars are also open to the small hours and are quite popular socialising spots.

The Casino at Resorts Casino Tunica

The casino floor at Resorts Casino Tunica is not a huge only, only being 35 000 square feet. Even so, it has a number of slot machines and table games, catering to pretty much every taste and style. Slots range from classics to movie based 3D high definition video slots. A number of progressives are on offer to for those who want to try their hand at hitting it big. Table games are represented by all of the well known names; Blackjack, Roulette and Poker all have different varieties and some lesser known ones such as Pai Gow can be played too. A separate High Rollers room offers much higher wagers than the rest of the casino floor, as well it own cashier cage. Free non alcoholic drinks are n offer throughout the casino to active players.