Hot Hot Volcano slot was developed by NextGen and is an online slot game that features five reels, three rows and a total of twenty five pay lines of which only one coin can be bet on each. Coin values range from as little as 0.01 up to the maximum of 4.00. The theme of the online slot game is based on a hot erupting volcano which is the background image. The volcano is placed amidst a lush green jungle and features various jungle creatures which are found upon the reels as certain symbols.

Hot Hot Volcano slot features wilds, paying scatters and a re-spin feature as well as a gamble feature which is playable after any winning spin. Winning amounts can be doubled or quadrupled by correctly guessing the colour or suit of a playing card that will be revealed. This feature is playable up to five times consecutively if the guesses are correct but any wrong answers result in the total amount gambled being lost.

The Hot Hot Volcano slot symbols include various themed images as well as the standard high valued playing card icons. The card icon symbols are those numbered from nine to ace and pay out anything from 6 coins up to 150 coins when three or more land on active pay line. The monkey and bunch of fruit symbols pay out anything from 15 coins up to 200 coins and the bird pays out 3 coins to 250 coins. The lizard is the highest valued symbol out of the standard ones and pays out up to 500 coins when landing three or more times on an active pay line. 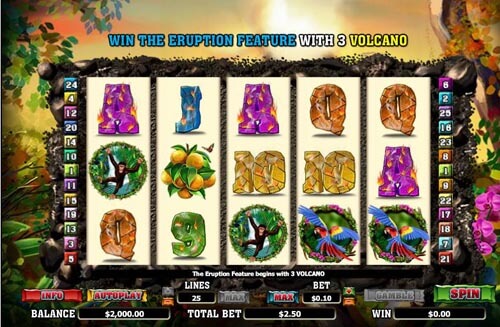 The Wild and Scatter Symbol

Hot Hot Volcano slot features a wild symbol which also happens to be the scatter symbol. This is represented by the symbol portraying an erupting volcano and will only ever land on reels two, three and four.

As a wild symbol the erupting volcano will stand in as a substitute for any of the other symbols when a winning combination is possible. When the wild symbol appears two or more times it acts as a paying scatter symbol and awards various multipliers which are multiplied by the total bet. If three erupting volcanos land on the second, third and fourth reels at the same time then the Hot Hot Volcano slot eruption bonus is triggered.

The Hot Hot Volcano eruption bonus is a re-spin bonus feature at River Belle mobile casino. The erupting volcano on the third reel will erupt and the wild symbols will take over all of the positions on the specific reel. The reel will then hold all of the wild symbols in position for the next five spins.

During these five re-spins any random symbol in any position on the other reels will become wild. If three of these symbols happen to appear simultaneously on the three middle reels during a re-spin then they will pay out the scatter rewards and not re trigger the bonus game.