Horseshoe Southern Indiana is a riverboat hotel and casino on the Ohio River just outside Elizabeth, Indiana. It is the closest legal gambling location to Louisville. The hotel and casino complex includes a large four deck river boat called The Glory of Rome, and a large hotel with 503 rooms. The Glory of Rome is the largest riverboat in the USA, and is the world’s largest riverboat casino.

The residents of Harrison County, Indiana passed riverboat gambling in 1994 via a ballot proposal. Over the next few years a number of different proposals were given to the Indiana Gaming Commission to start a riverboat gambling organization. Over a year passed before it was finally approved and the Caesars World Riverboat Development Incorporated was granted the first licence in 1996. The entire complex was originally meant to cost $228 Million but two years in the projected cost was raised to $275 million. 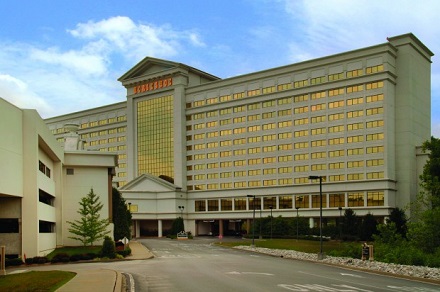 A site for the complex was chosen along the Ohio River in Indiana, close enough to the city that it would attract people, but far enough away that it would still be legal to operate, as casinos are not legal in Louisville. Opposition was raised both by Louisville officials and by environmentalists who were concerned about impact on waterways and wildlife. However, Caesars World had already sunk $11 million into the project and wasn’t about to let anything get in their way. A deal was struck where Caesars World could go ahead with the site, as long as they carefully considered the number of trees that had to be cut down, and what would happen with water waste.

Horseshoe Southern Indiana finally opened in Nov 1998, a bit later than it was initially supposed to due to more environmental groups issuing lawsuits to stop the opening. The Glory of Rome sailed for the first time Nov 16, 1998 with a VIP cruise up and down the river. There have been many obstacles since the opening of the Horseshoe Southern Indiana, one notable one being that historically the entire Ohio River belongs to Virginia, who has threatened to stop operations of riverboat casinos on the river. To the extent that in 2002 a proposal was put forward to buy a submarine that would patrol the waters of the commonwealth and search and destroy all riverboat casinos. This didn’t come to pass luckily.

Today the Horseshoe Southern Indiana is a booming hotel and casino with not on the riverboat to its name but a large hotel building containing 503 rooms, a spa, a fitness centre and numerous other amenities. The rooms are luxurious and guests can choose from a suite or a regular room overlooking the river. The bingo cafe itself has over 1700 slots and 200 video poker machines, offering everything from three reel classics to five reel 3D animated high definition slots. A number of the slots are progressive which means that you can win an ever-increasing jackpot. Table games are well represented and a standalone poker room offers a number of varieties of the popular card game.

Regular tournaments and promotions are held not only for hotel guests but locals as well. The Horseshoe Southern Indiana complex has a number of restaurants that cater not only for players, but day visitors and those wanting a touch of old school luxury. Everything from fine dining to quick bites are available, and of course the hotel rooms have access to room service 24 hours a day.