Gems Gems Gems is the title of a jewel and gem-themed online slot game created by developer WMS Gaming. This glitzy and glamorous slot game plays out over a unique setup of 4 different reel sets, each of which is filled with an array of expensive and colourful gems to suit the theme.

There are 5 reels and 80 paylines in total, 20 for each reel set, and Gems Gems Gems offers two different bonus features for its players. There is a free spins feature with multipliers that can be triggered with scatter symbols, and the Multi-Reel bonus feature also comes into play when scatters and wild symbols land.

WMS Gaming’s Gems Gems Gems slot focuses entirely on precious gemstones, and the game’s 4 reel sets are laid out against a sophisticated blue velvet backdrop. The reels themselves have been designed in a contrasting shade of red velvet, and each reel is framed by an ornate gold border.

The slot’s pay table is also gold to match the exclusive feel of its graphics, and every reel set is filled with an assortment of brightly coloured gems in various shapes, sizes and hues, including ruby hearts, sapphires in the shape of teardrops and carefully cut, sparkling emeralds.

Symbols on the Reels

On the reels of Gems Gems Gems, players will find nothing but jewel symbols. These include gems in shades of yellow, blue, green, orange, red, purple and pink, as well as smaller versions of these gems for the additional 3 reel sets. 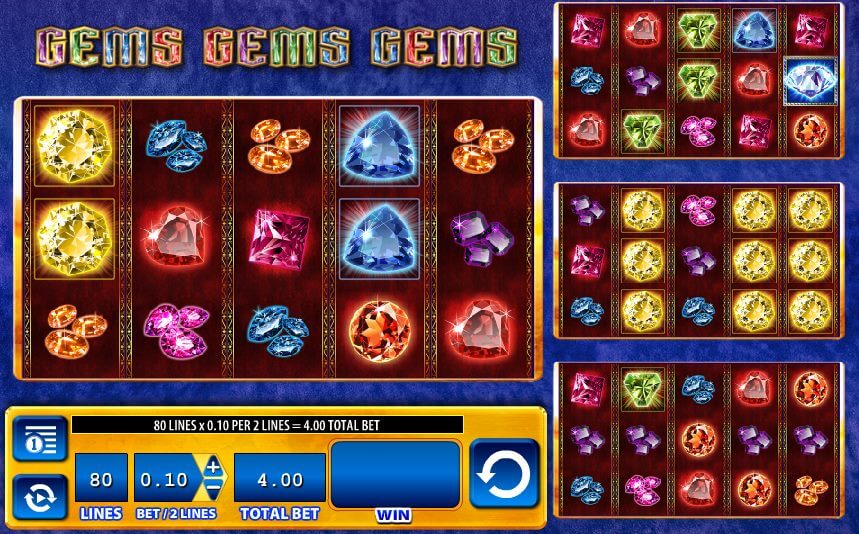 The Gems Gems Gems logo serves as this WMS slot’s wild symbol, which acts as a substitute for all other symbols except for the scatter, helping to create winning symbol combinations. The scatter symbol in this game is a large diamond icon, which activates the free spins feature.

The free spins feature in the WMS Gaming Gems Gems Gems slot is triggered by landing 3 or more diamond scatter symbols anywhere on one of the reel sets. Doing this will award players 10 free spins with which to play.

Aussie pokies games online players can also win more free spins during the feature by landing another 3 or more scatter symbols on the reels.